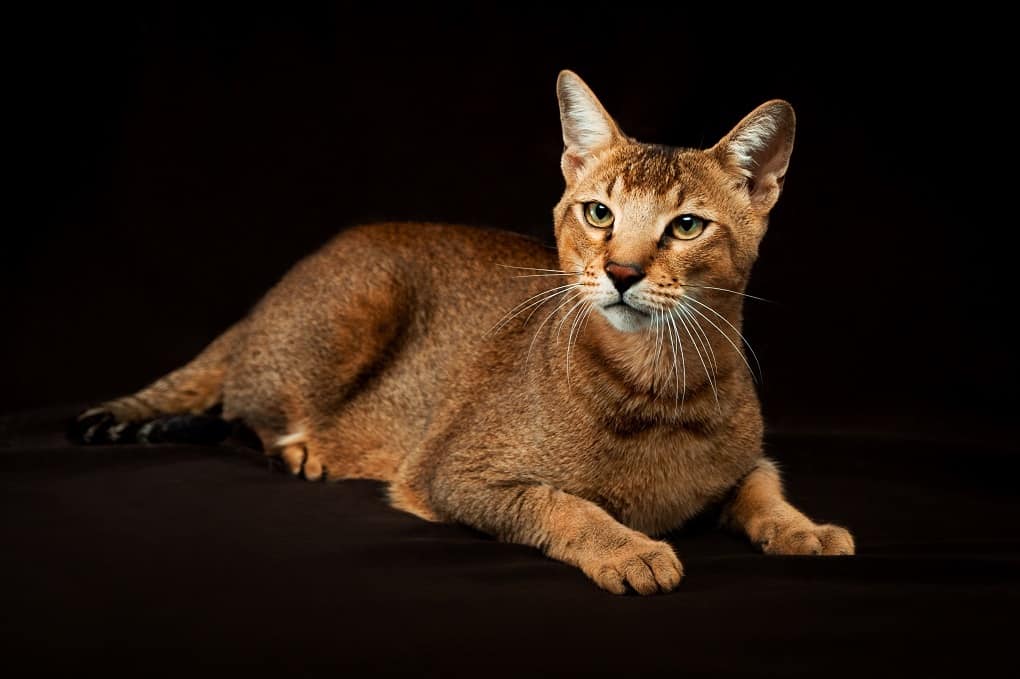 If you are an experienced cat owner and want something a bit bigger, more active, and more exotic, the Chausie cat might be a good choice for you. This cross between a domestic and wild cat is an interesting one to have in the home.

The Chausie cat is quite a social and friendly cat, something which it inherited from the domestic cats it was bred with. This cat is extremely social and does not like to be alone at all.

It’s not a good cat to get if you are often going to be away. The Chausie cat is likely to follow you all around the home to see what you are doing. They like to be social and get attention, but they are not ones to snuggle or to be lap cats.

From the wildcat side of the family, the Chausie cat is very playful and active. These cats need a lot of space, a lot of toys, and they love to run around to blow off steam.

Check the video below for more information about Chausie Cats:

This is a large and active cat. Moreover, these traits come from wild cats, and wild cats hunt. You can expect a Chausie cat to be a real predator and hunter.

A mouse or rat doesn’t stand a chance with one of these cats around. It’s not a cat to get if you do not have ample space, energy, and attention to supply it with.

The Chausie cat originally stems from a mix of jungle and domesticated cats. This cat was first created back in the early 1960s when people began to deliberately breed wild jungle cats with domestic cats.

Domestic cats such as Abyssinians, Orientals, and Bengal cats were bred with the Chau cat, a wild jungle cat.

The result of this was that the Chausie cat was created, a cat with the personality of a domestic cat, for the most part, and the appearance of a wild jungle cat. What is interesting is that only select countries around the world, such as the US and France, officially recognize the Chausie cat.

It was American breeders which originally began crossbreeding wild Chaus cats and domestic cats to create what we now know as the Chausie cat. 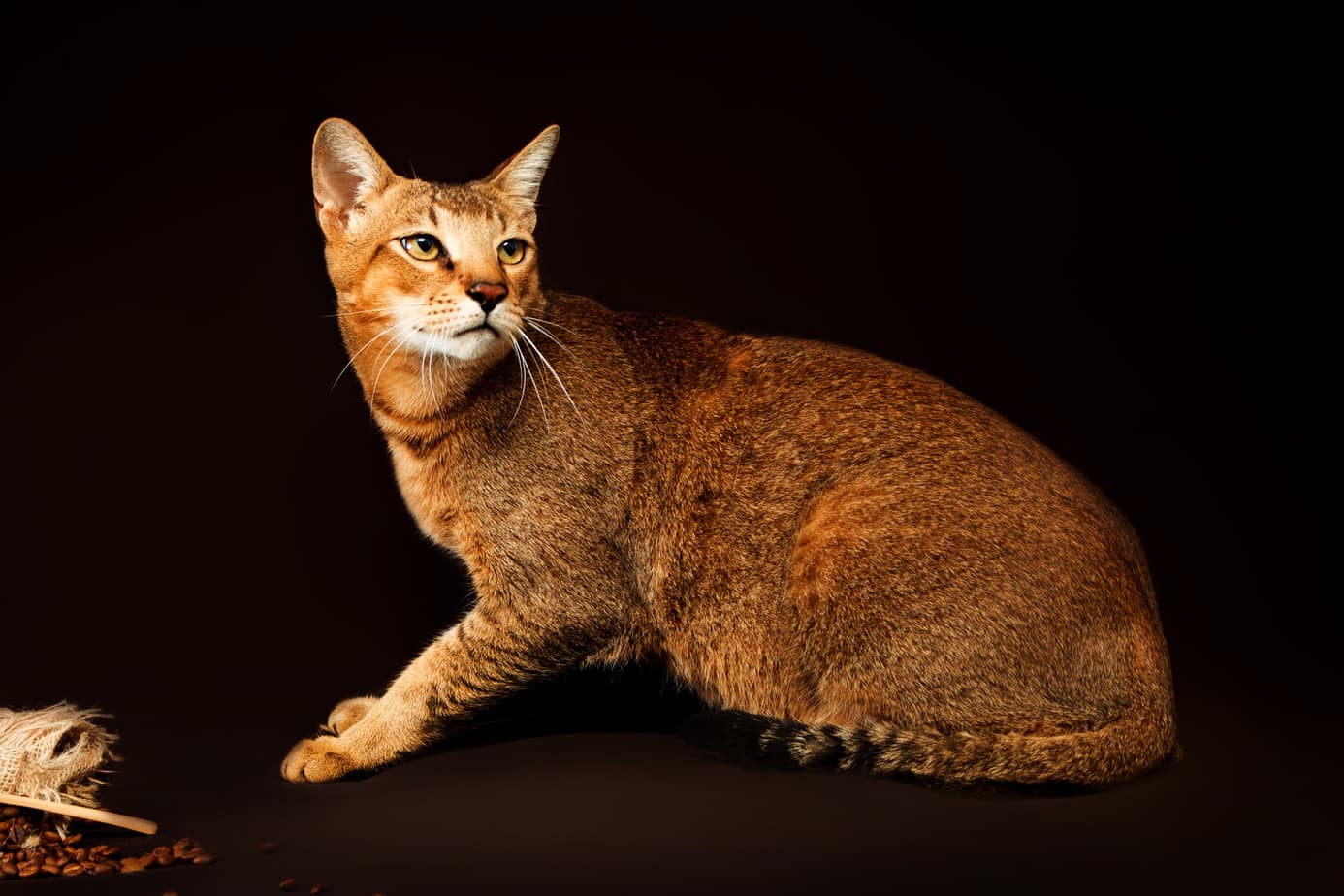 The Chausie cat tends to be quite a healthy cat. They are known for having fewer illnesses than many other cats, and are great for owners who do not want to have to worry about large medical bills.

They may suffer from heart and periodontal disease, but these are not breed specific. They need a lot of exercise and high-quality food if cat obesity is to be prevented.

Generally speaking, they are very healthy cats. The other thing to know here is that many Chausie cats may be intolerant to gluten and have sensitive digestive systems.

The Chausie cat is relatively easy to take care of in terms of grooming. It has short fur and not much of an undercoat.

Using a soft brush to brush it from top to bottom once per week should be fine; you need to remove old dead hair and skin. It does not shed too much either, so that is a bonus.

Giving it baths is not recommended unless it gets exceedingly dirty or smelly. You will also want to brush the teeth of the Chausie cat on a near-daily basis to prevent periodontal disease.

Moreover, good claw care is recommended, and a good scratching post. Other than that, you will want to wipe out its ears with a cotton swab soaked in a mix of warm water and cider vinegar.

The Chausie is quite a large and imposing cat. It has a very muscular figure with a fairly long body, plus it also has long and muscular legs.

Their tails tend to be shorter than most other breeds, and they have a triangular face with a rounded muzzle. A full grown Chausie cat, especially the males, can be up to 18 inches at the shoulders, with smaller females usually being between 14 and 16 inches in height at the shoulders.

The Chausie cat is a big cat and yes, it can also get quite heavy. The heaviest Chausie cats around have been known to reach 30 pounds, but the average is closer to 25 pounds, with smaller females usually topping out at around 24 pounds. They eat quite a bit of food.

The Chausie cat is a very active cat, and it’s this way because it was bred from jungle cats and fairly active domestic cats. They love to run around, play, hunt, chase things, and it is recommended that you have a garden or large outdoor space for them.

They will not be happy if they are cooped up inside all the time.

No, the Chausie cat is not hypoallergenic. It may not have long fur or much of an undercoat, but it still produces allergic reactions in people with cat allergies.

The Chausie cat is a moderately long-lived cat. Generally speaking, these cats will live up to 14 years of age at the most, with 13 years being the average.

The Chausie cat is quite difficult to care for in the sense that it is very active, playful, wants a lot of attention, and needs great food. They don’t need too much grooming, but their size and active nature does warrant a fair amount of care and maintenance.

Where to get a Chausie Cat

The Chausie cat is a pretty rare breed and very exotic too. There are breeders located across the world, with many being in North America, as it was American breeders who first created this cat breed.

You will want to get your Chausie cat from a reputable breeder.

How much does a Chausie Cat cost?

The average cost for a Chausie cat kitten is going to be between $400 and $600, with adults costing closer to $1,000. Depending on the breeder, the location, availability, and family lineage, some Chausie cats can cost up to $2,000.

When it comes down to it, all there is to think about here is the color and pattern of the Chausie cat in question. You may also want to inquire about health issues, especially in terms of the parent cats and other ancestors.

Remember, when choosing a Chausie cat, most of them are all very active.

Responsibilities to consider in the care of a Chausie Cat

The Chausie cat requires a lot of space to play and run around, plus toys and scratching posts. These are active hunters, they need space, and they need to be active.

They require moderate grooming, a lot of high-quality food, and they do not like to be alone.

Yes, the Chausie cat does need a lot of human interaction, as they are very social and do not enjoy being alone. They typically follow their owners around the home. 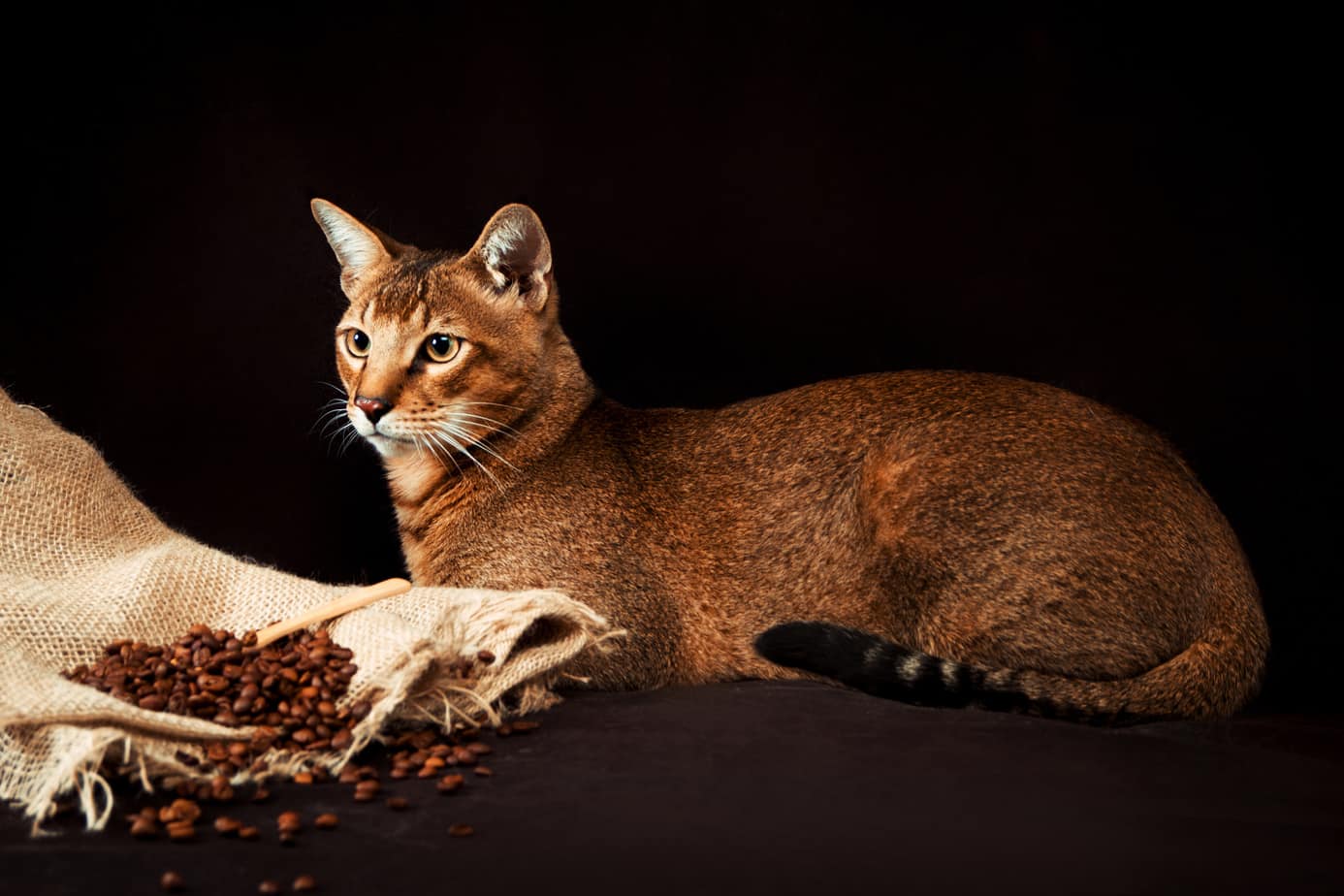 The Chausie cat is playful, social, and very active. This is a cat that wants to hunt, run around, explore, and play. It’s not a couch potato and it does not enjoy being picked up or sitting in laps.

It will explore your home, get onto the fridge, and open anything it can.

Generally speaking, the Chausie cat comes in a grizzled black tabby pattern, kind of like a brown and black mesh. They can also be solid black, black, brown, silver, and a mix of all of the above.

The Chausie cat is quite affectionate; they are social, they want to be with their owners, and hate being alone. That said, they are not lap cats.

The Chausie cat does fairly well with kids and dogs, although it is not overly fond of them, but it tolerates them.

The Chausie cat is known for being quite smart and is known for opening up doors, cupboards, and even sometimes learning tricks, although, it is largely an instinct-driven hunter.

The Chausie cat has a lot of energy; they want to run around; and it is not often you will find this cat lying still and doing nothing.

The Chausie cat requires a fair amount of maintenance. They don’t require too much grooming, but they do need exercise, a high-quality diet, lots of toys, and other activities to keep it occupied.

Generally speaking, the Chausie cat comes in a grizzled black tabby pattern, kind of like a brown and black mesh. They can also be solid black, black, brown, silver, and a mix of all of the above.

The pattern it features will depend on the type of domestic cat which it was originally bred with.

The Chausie cat makes for a good family cat, as they are social and friendly. However, be aware that they are big and active, which means they need a lot of high-quality food and room to run around, plus they do not want to be alone.